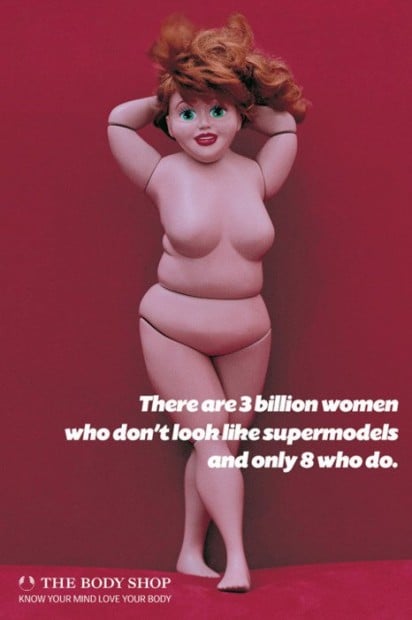 I stole this image from someone’s Facebook profile. Attached to it was the dubious claim that Mattel had sent a cease-and-desist order (possibly true) and had the posters removed from all Body Shop locations (unlikely). Whether this image bears enough resemblance to the Barbie doll to constitute trademark infringement warrants a whole separate legal discussion. For the sake of this discussion, I will assume that the story is true—because if so, it marks a tremendous blunder for both brands.

For Mattel, the company’s alleged demand to remove this poster does more damage than it prevents. The doll clearly isn’t an actual Barbie, but Mattel is now (even more) associated with perpetuating unhealthy attitudes in young women. I’ve seen this story passed around virally among the very audience Mattel needs to connect with the most—mothers.

For the Body Shop, any sign of capitulation would send a weak and dispirited message. Actually, the company probably has a pretty good case to fight for fair use of the image. But even if it loses, the fight is still worth fighting—especially if the Body Shop really wants to present a positive body-image message (a la Dove). When you give up without a fight, it says that you’re disingenuous about your branding efforts. You end up looking phoney, which is probably the worst thing you could do when trying to make money off an earnest message like this.

Of course, all of this assumes that the story is true, which I doubt—especially the part about Mattel “banning” the posters. A few minutes of Google-fu didn’t turn up much, except this New York Times article about the campaign from 1997. Aside from that, I could only find a multitude of blog posts, each one parroting the same story. I remain skeptical.